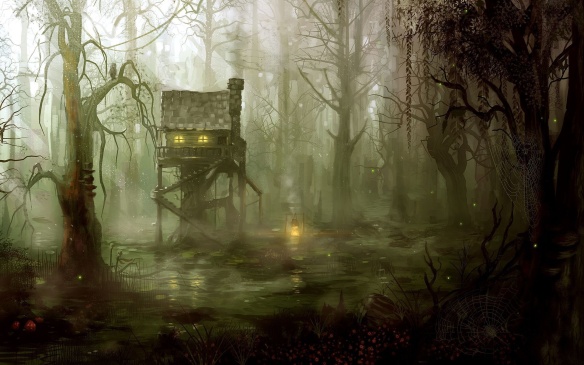 The Lamplighters (the name the Players have given their group), began the session in Scenic Bergenzel, and finished the session still in Bergenzel.

I thought they would have left, for at the end of the previous session, the came across the Mona Lisa in the home of Rudolph Grauph, the Other Worldly Explorer. This is not a copy, but the actual painting by da Vinci from an alternate Earth. Sure, this means that there are now two copies of the Mona Lisa in Europe. But still, it’s authentic and will fetch the party more than enough silver (45,000sp, to be precise) to level everyone up. But there were still mysteries to solve, and the Players suspect that there’s evil-doing they might be able to put a rest to. And because they have, in their heart-of-hearts, a desire to be heroic, they stayed to deal with the mysteries at hand.

The session began with a lot of throat clearing on the part of the Players. They had a many threads of adventure and danger in front of them, and weren’t sure which way to go or what to do. This wasn’t because they were lost or uncertain of their choices. There were simply so many choices!

The priest, Father Iwanopoulous had seen enough weirdness and terror for one night (the stuffed and mounted corpses, the alien artifacts in the Explorer’s home, the attack by Uncle Ivanovik) and asked to be returned to his church.

The PCs agreed and traveled to pick up Herman van Kaus, who they had left (in a state of shock after seeing his niece’s true nature) at his brother’s house.

Herman was still in shock. And Father Iwanopoulous, missing the safety of his church, asked that he and Herman be brought by the adventurers back to his church. The adventurers agreed, dropping them off, and working out a signal for the priest to mark when it will be safe for the those hiding in the church to open the door.

All of this took time on the part of the adventurers, with everyone with a lit lantern tracking the amount of oil used with the poker chip scheme I came up with.

Father Iwanopoulous had told them that a member of the Dietz family was a servant to Jako and Sue Amster. He often went up to the mountain on errands for the Amsters, and Father Iwanopoulous believed he had dealing with Grauph in Grauph’s base up in the Alps.

The whole purpose of coming to Bergenzel was to track down Grauph based in the Alps, since they had heard rumors he had traveled to other worlds. They had heard that he had a home in Bergenzel that he sometimes stayed at, and so Bergenzel seemed the best starting point for their quest. Since arriving in Bergenzel:

The only way forward to using the drawings they had found of other worlds was to find his keep in the Alps and see if contains the answers they seek.

But first, a few notes about how an Other Worldly Explorer ended up in a published module, and how all this fits into notions I had four months ago… 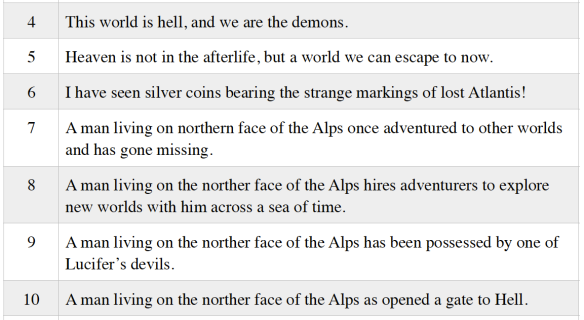 If you look back at the Random Rumor Table I created for the campaign, you can see how I began sowing seeds of all these ideas and ambitions into the game from start.

You can see the references to Grauph in the image from the table above. I didn’t know his name Grauph four months ago, though I did know there was a man who had travelled to different worlds. I thought at first I was going to make his home the home of the last scenario in No Dignity in Death. But then I bought and read Scenic Dunnsmouth and fell in love with it. I decided to place the village at the base of the Alps on the way to the home of the Other Worldly Explorer.

The fun of Scenic Dunnsmouth is that you create the village from scratch, using dice and playing cards. The book contains a whole slew of NPCs, each divided into four families with specific traits. There are also special locations that can come up in the creation process, depending on how the dice fall.

[The only other solid change was switching some of the names out, to make them make more sense in the Bavarian setting where I had place the town.]

And when I randomly created the home of Jako and Sue Amster, I discovered they had a servant, Isiah, who “is almost always making treks into the mountains to bring back hay and vegetation for the cows.” I immediately decided that his “treks into the mountains” involved interactions with Graup at his keep. Which would tie into the quest the Player Characters had set for themselves.

Part of the fun of the campaign has been the challenge and delight in taking all these terrific modules and finding the elements already in them to inspire me in my efforts to stitch things together. For example, the snow globes found in Death Frost Doom inspired my notion that there were many worlds, some of them at war with each other using earth as a battlefield, that the Player Characters could travel to. This, in turn, led to the notion that while my game was set in 17th Century Europe, I could use all the wonderful Lamentation of the Flame Princess books I had bought no matter how fantastical. (I already owned Death Frost Doom, Qelong, and Carcosa before play began, and have picked up Isle of the Unknown, Castle Gargantua, and others since we started.)

The adventurers, followed Father Iwanopoulous’ directions, heading off for the estate of Jako and Sue Amster on board their skiff. As near the southeast corner of the village they hear gentle mooing from cows. They find a spot to hide the skiff, climb up the bank to the driest part of the village they’ve seen so far. They see cows up ahead.

They get Isaiah and Martin to the church and leave them with the priest. They then head to Magda’s cottage.

Carefully they approach the cottage, using trees and shrugs for cover.

Everyone waits a moment. The door opens with a creak. A few members of the party can just make out the pale face of a woman, the rest of her hidden by the black clothes she wears.

Anika hears Magda speak… she is casting a Charm Person on one of the clerics. (Charm Person is the only spell she knows, sadly.) Anika casts magic missile. Initiative rolls are made. Magda gets her spell off, and the cleric fails his saving throw. But Anika’s magic missile rush at her with streaks of blinding white light and cut Magda down in one attack!

She falls dead in the doorway. The Charm Person breaks.

As the Players would later say:

“She brought a Charm Person to a Magic Missile Fight.”

The players had their characters carefully enter the house and search the chicken shed attached to the cottage. They searched a full twenty minutes before they could feel the heat from the basement below on the floor and found a secret trap door.

Lifting it, they saw stairs leading down to the basement.

And there we stopped of the night…