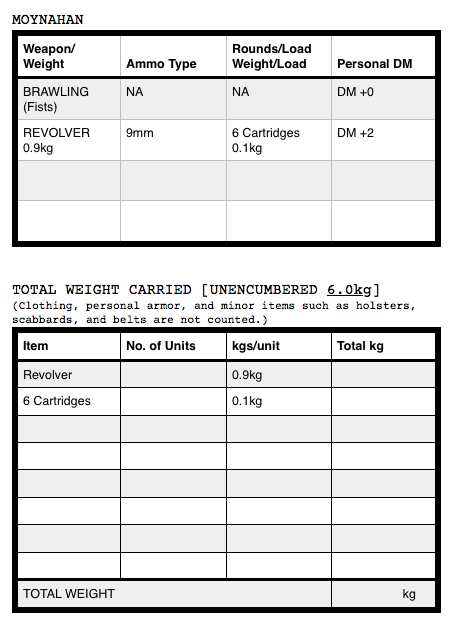 The other day I posted the character sheets I’ll be using for the game this weekend. The idea is to strip the game down and keep things clear. Because of the limited time for the convention, I want to have as many of the tools of play ready to go and easy to read for the players. But if I were starting a new Traveller campaign I’d probably do the same thing.

Encumbrance rules, which are not features in many contemporary games, are part of the sensibility and tools of the game.

Keep in mind that the values of Strength and Dexterity affect how effective a character is with blade weapons and firearms, respectively. So, as these values go down, the character might lose Advantageous DMs for weapons, or might even suffer penalties for falling below the required value to handle a weapon efficiently. The penalties will also affect how well a character handles himself in combat, allowing an effective shot to take a character down more quickly.

Notice that Traveller provides choices. It is not that there is an absolute limit the character is working with. A character can carry a heavier load, but at consequence. These kinds of choices are, I think, very much part of the feel of the game. You don’t always get everything you want in Traveller, but you are given choices about what you need the most.

The gear sheets are set up to match the pregens I posted, with one card per Player Character. (See the name at the top of each.) 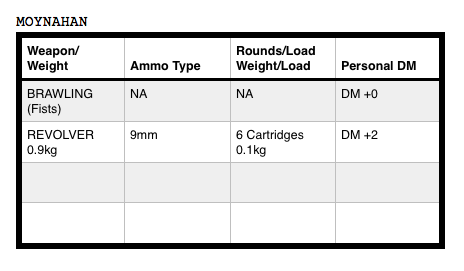 The table also includes what I call the “Personal DM” of any particular weapon. I’ve defined Personal DM as the value of any Skill the Player Character might possess added to whatever value should be factored in from the Minimum or Advantageous values for Strength or Dexterity for a particular weapon.

So, for example, in the gear sheet above:

By adding this pre-calculated value to the Weapon Cards I’ve made we get a Throw value very quickly.

The idea is to have these as many values percolated so the Players don’t have to worry about this stuff at the start of play. And if they pick up new weapons there is a template in place for theme to sort out the calculations and fill in the blanks with a little bit of instruction.

Note, too, that if the characters take damage, the values for the personal DMs might drop (either losing the advantageous DM, or acquiring a -DM for failing to have the minimum value require to use the weapon efficiently.) 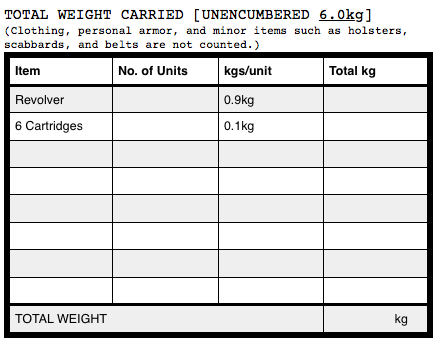 I created the second table with the same agenda of making place simple and efficient for the convention game.

The logic of the setup is that the Player Characters are at the end of their ropes in a mining colony at the end of a series of jumps. They have no money left and little of person value. Simply to get back to an A or B port in the hub of commerce and trade would cost Cr16,000 to Cr24,000  (depending on the Jump Drive of the ship for two or four jumps). And that is not money they have.

I’ll be handing out a list of things like communication gear, electric torches and stuff that the players can draw from for routine gear. If they want it, they can have it. Bu it will start adding to their load out. But no weapons, no armor, no expensive stuff. So the gearing up phase at the start of the session won’t be about shopping. It will be, “How much stuff do I want to have vs. how effective do I want to be?” That’s an interesting choice.

If I were to start a campaign I would probably make each of the tables longer for each list. But I think having these details worked out as part of each Player Character’s load out helps the Players get in the minds of their characters and makes the minutia of Traveller gear–which is crucial part of the game–easy to track and reference as needed.

Here are the gear sheet sets that matches the Player Character pregens I previously posted. You’ll find the blank sheets at the end of the doc.