Currently in my Monday Night Group everyone wants to GM something… so we’re playing lots of games and lots of mini-campaigns.

We play Lamentations of the Flame Princess in spurts along the way. But mostly I’m playing a lot of RPGs these days. Which is great, since I’m writing several projects right now. It’s nice not to have prepping RPG sessions added to the list!

That said, my brain needs to kick back on occasion. So some I and some friends all picked up the new Warhammer 40K Kill Team skirmish game. I got some paints and supplies… and for that last few months, on and off, I’ve been assembling the scenery and painting.

It’s been slow going. I don’t get to do it as often as I’d like, and I’ve been learning along the way. (I haven’t done anything like this for about 25 years.)

And I do love it. Like… I love it. Sitting down to work on these miniatures is a surprising stress-reducer.  I’m really having a blast with this.

Today I finished the scenery up to putting the finishing coat on–which I’ll be doing this week.

Next up, assembling the Genestealer Cultists that came with the boxed set.

My friends and I have a local convention we’ll be going to in February. The plan is to have scenery and minis painted up by then so we can meet up and have the little guys shoot the hell out of each other.

So, here is how the painting of the scenery went.

I decided to distress several pieces, and add debris to the second floor pieces… 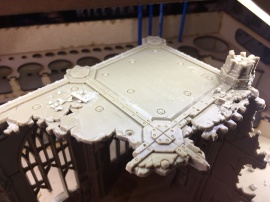 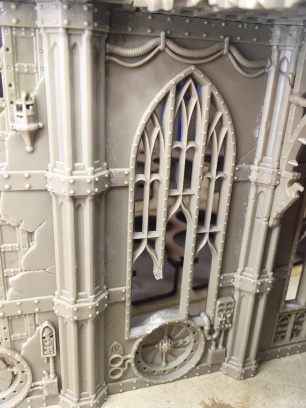 Priming the pieces. I used tacky glue to stick pieces to paint sticks so I could move them around more easily.

For the primer I went with Krylon, which has several flat spray paints that I’d heard bonded really well with plastic. I sprayed a flat white for my first miniature work. 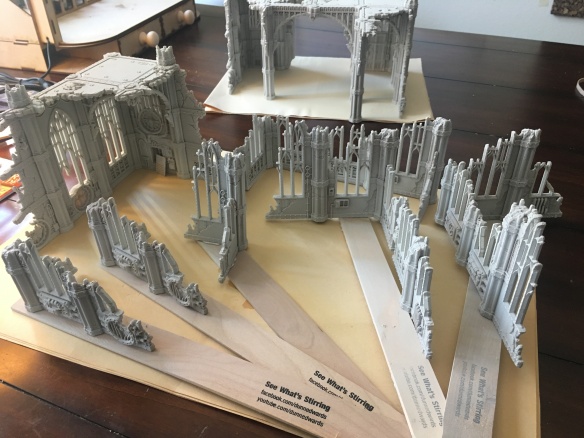 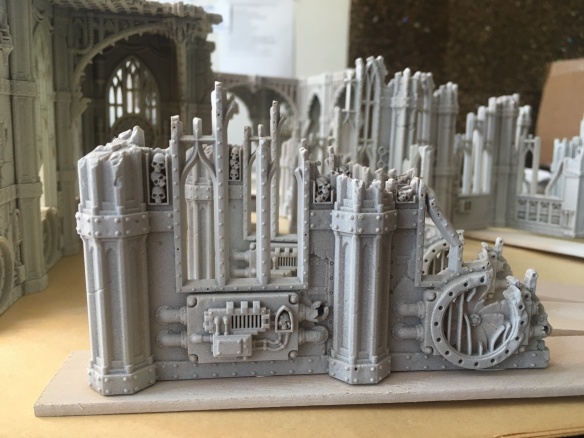 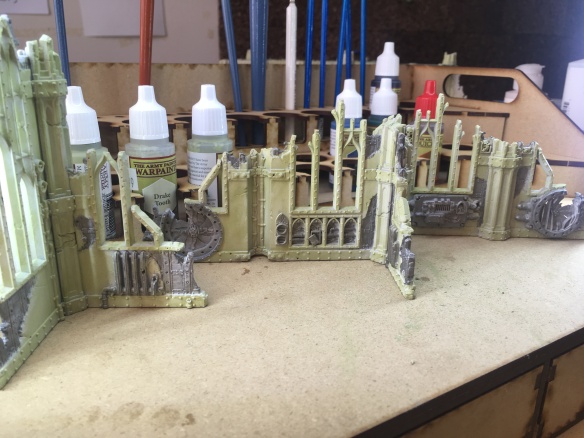 I’m using The Army Painter Warpaints and I love them.

I know some people find them are too watery or thin, but that hasn’t been a problem for me. I give each bottle along, solid shake and the paint comes out fine.

That said, because other people have had problems with the paints, I also take the top off each bottle with a pair of pliers, drop in a hematite bead, and then put the top back on. The hematite bead acts as an agitator, and it seems seems to be a good idea!

The Warpaints are also more cost effective than Citadel Paints. Each Warpaint bottle comes with 50% more paint than the Citadel pot (18ml vs. 12ml), and a Warpaint bottle costs about 30% less than a Citadel pot. (Prices vary widely for paints, of course, depending on the retailer. After looking around, I think Miniature Market is going to be my go to source for paints. The paints are always at a good price point.

(I went in whole hog when I found The Army Painter Mega Paint Set on Amazon back in September for $88.99, which was a crazy good deal for 50 bottles of paint.) 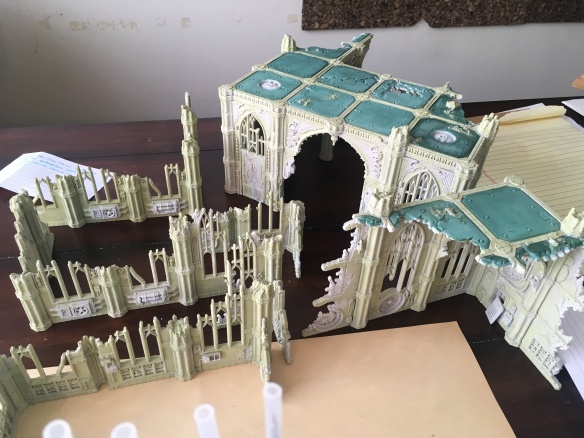 I went in pretty deep and picked up The Army Painter Mega Paint Set after doing a lot of research. I haven’t found a clunker in the paint set yet.

As for brushes, I realized pretty quick I’d be ruining them fast since I didn’t know what I was doing yet. So I picked up the Super Value Brush Pack By Artist’s Loft from Michaels, which is essentially a variety pack of brushes for $5. I have also scoured Amazon looking for deals on small brushes for detail work. 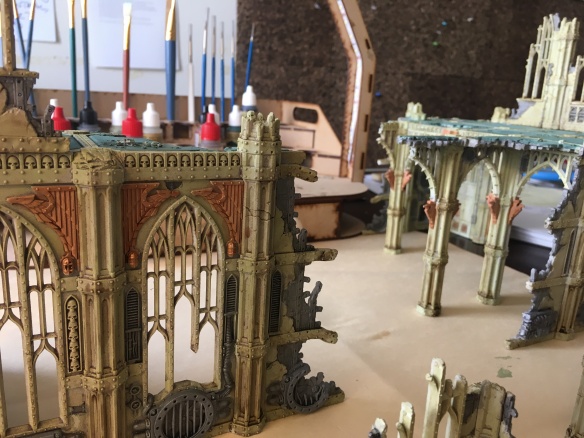 And here is the last images from today as I said, “Okay, that’s it! Time to stop and build some Genestealers!”