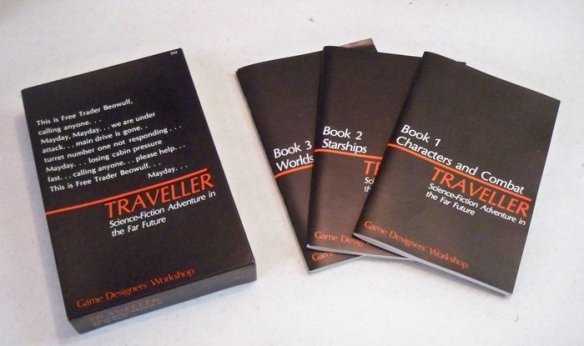 Traveller is a game I fell for when I bought my first copy from the Compleat Strategist in New York City as a teenager. The Little Black Books of the boxed set (reprinted almost completely in both The Traveller Book and Starter Traveller) promised an aggressive, hard SF that would span the stars. I would read the rules and feel my adrenaline race. I wanted to get going into adventures using the rules set.

The game also boggled my adolescent brain because I couldn’t map it to the Science Fiction shows and movies I grew up watching. It wasn’t Star Wars. It wasn’t Dune. It wasn’t Star Trek. It wasn’t Asimov’s Foundation. Which was strange because in the basic rules no setting is provided. And yet, it certainly seemed to be one thing and not another thing. I just couldn’t figure out The Thing.

The game is a toolkit, in the sense that the Original Dungeons & Dragons digest sized booklets were a toolkit: an inspiration for the GM and the Players to create whatever sort of fictional environment and play style they wanted. (The Traveller box and three booklets were a direct mirror of the Original D&D format.) Though setting elements were inferred within the rules (much like setting elements are inferred in The Burning Wheel’s rules), one was not provided. One could really take the rules and tweak them and make anything from a Dune-like setting to something more akin to Warhammer 40K. Seriously. It would take work and tweaking, but there was a framework for building a system that would create characters and keep things moving forward.

But, as I’ve said above, there seemed to be a default setting implied in the lifepaths of character creation; the weapons selected for the books (assault rifles, shotguns, and laser rifles, but no laser pistols); the fact that travel between the stars was slow and communication could go no faster than travel; an interstellar civilization of some kind (or more than one) that depended on military forces to keep it in order; Patrons that hired the Player Characters to go do work on contract; men and women who, after getting drummed out of the service, did not settle down or get jobs but where driven to go to the frontiers on tramp freighters and often get involved in criminal activity to stay financially afloat.

It wasn’t until, one night at a revival house movie theater, that I watched “The Man Who Would Be King” for the first time. And I thought, “Good lord, that’s a Traveller adventure!” The movie is about two soldiers of the British army in colonial India, drummed out of the service, which buy arms and head into the mountains of Afghanistan to become rich kings of their own domain.

You get the military background. The grifter/criminal element. The abrupt violence. The amoral plotting of the protagonists. The tension of the men and women from civilization who don’t have the knack for being civilized. It all fell into place.

More recently I came across a blog entry about the literary antecedents for Traveller. It goes in pretty deep, but here’s the pertinent part for me

“The look and feel of CT is internally consistent and somewhat generic, yet still rather difficult to match with a precursor. One would expect a science fiction role-playing game set in a galactic empire to look like Asimov’s Foundation trilogy (1942-50), the granddaddy of all galactic empires, yet CT does not—eschewing Asimov’s atomic ashtrays, blasters, the full-metal planet Trantor, and a stardrive of such speed that a trip from the galactic rim to the core can be done in a honeymoon jaunt. Likewise CT does not look or feel like Frank Herbert’s Dune (1960s ecology SF), or Larry Niven’s ‘Known Space’ (1960s hard SF), or E.E. ‘Doc’ Smith’s ‘Lensman’(1930s space opera). It might seem strange that an SFRPG based on SF texts would somehow miss all the so-called classics, but the problem is that these classics are mutually exclusive—they cannot blend well together.

“What the creators of CT were after was science fiction adventure, featuring freelance “adventurers” (with all the connotations of gold hunters, mercenaries, and trail blazers that this term implies) who could live or die in the course of pick-up games. They seem inspired by adventure movies like ‘The Treasure of the Sierra Madre,’ ‘The Wages of Fear,’ and ‘The Man Who Would Be King;’ noir movies like ‘Yojimbo’ and ‘Kiss Me Deadly;’ ‘heist’ movies like ‘Rififi’ and ‘Le Cercle Rouge.’ All of which amounts to the polar opposite of Star Trek (where everyone works together for the government, the government is good, there is a moral code in the ‘Prime Directive,’ and nobody important dies).”

Add in “The Wild Bunch,” “The Good, The Bad, and The Ugly,” “Heat,” “The Seven Samurai,” and you start getting a lovely set of compass points for what I think Traveller in its purest form is about.

But notice that none of these references are SF movies or novels. Thematically they resonate with the Classic Traveller setting, but they’re not the color. Because, for the most part, no one had ever done this before. Marc Miller and the gang at GDW were making something new. (The closest SF movies I can come to in terms of tone and story would be “Blade Runner” (our protagonist is a contract assassin, let’s remember), “Outland” (though the protagonist is stalwart Sheriff), and “Aliens” (where, if you rip away the SF trappings, is a story about greed, betrayal, and loyalties within a species.)

The reason I couldn’t figure out what to do with the game was because I was trying to map it the color and stories of SF movies and novels. But those SF movies and novels really didn’t exist. This was hard-boiled fiction at the edge of an interstellar empire!

And now here is Marc Miller, on the last page of the game, addressing the reader in “A Final Word”:

“The players themselves have a burden almost equal to that of the referee: they must move, act, travel in search of their own goals. The typical methods used in life by 20th century Terrans (thrift, dedication, and hard work) do not work in Traveller; instead, travellers must boldly plan and execute daring schemes for the acquisition of wealth and power. As for the referee, modern science-fiction tradition provides many ideas and concepts to be imitated.”

The post, again not about setting, was about kinds of stories and kinds of characters. In particular stories that feature the kinds of PCs generated by Little Black Books I-3:

As far as setting goes, the only correct answer to the question, “What are the correct inspirations for a Traveller game” is:
The ones you want