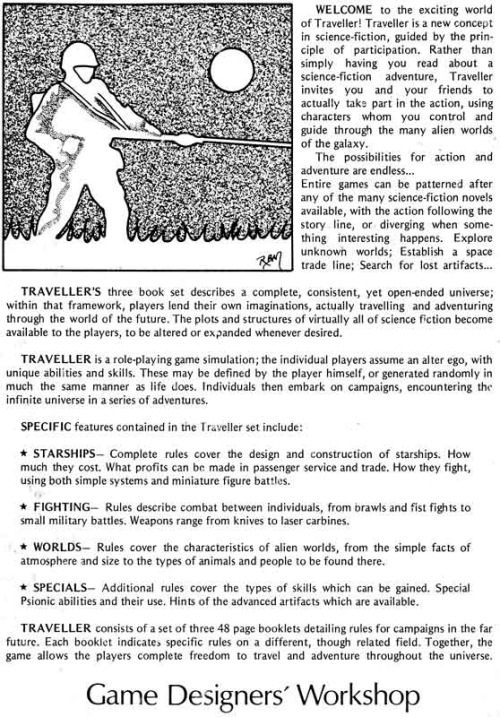 I began digging into Classic Traveller a couple of years ago. Which led, in turn, to me examining the early days of Classic Traveller and thinking how the game was played before the Third Imperium and became conflated with the game itself. That led to working up the notes that led to my Out of the Box series.

However, I just came across a series of blog posts from 2010 by Victor Raymond. Raymond started role-playing in 1975 and had the good fortune to game with some great people over the years. He was a regular at Professor Baker’s Thursday night Tékumel game.

At Raymond’s Sandbox of Doom site he wrote a series of posts about the 1977 version of Traveller and how people saw the game at that time in RPG’s history. The posts are fascinating for the care with which he digs into the text of the Little Black Books, explains how the RPG community in Minneapolis used the game c. 1977, and how the 1977 edition contrasted to the games and play styles of later editions of Traveller and later RPGs in general.

Below are links to each of his Traveller Tuesday, as well as passages from each of the posts. Each post is worth reading in whole.

The Other “Three Little Booklets”

I started playing Traveller back in 1977. I had been role-playing for a couple of years at that point, and I remember gamers coming back from Origins with a new game they were all very excited about. Within a couple of months the black box with the above text, containing three digest-sized booklets, had arrived and we all started setting up our Traveller universes.That last bit is rather important.

The booklet titles and organization were an homage to Original D&D: Characters & Combat, Starships, and Worlds & Adventure. A fairly quick read of the rules showed science fiction influences including Poul Anderson, Jack Vance, Jerry Pournelle and Larry Niven, E.C. Tubb, Isaac Asimov and H. Beam Piper. Aside from the cover quote, and a bit of detail about the example character, Merchant Captain Alexander Lascelles Jameson, there’s little if any background inherent in the original game.

So it was up to the referee to come up with their background and setting for adventure, and it was nearly two years before GDW began providing their own “official setting” for Traveller – the Third Imperium. In that span of time, there were a lot of campaigns developed, and they reflected a wide range of imagination, much like the original D&D campaigns started c. 1974. What makes this all interesting yet today is that – like Original D&D – Classic Traveller represents a much larger range of gaming possibilities than the GDW in-house campaign that eventually became synonymous with these “three little black booklets.”

The Influence of OD&D

But the deeper point here is that the perceptive crew at GDW did not see very much value in messing with success. Besides the parallel in structure (which I mentioned earlier), what Traveller and Original D&D had in common was a design that expected referees and players to add their own elements to the game. Put another way, the lack of background was seen as a design feature, not a “bug” or “missing part.”

What did this all mean, back in 1977? Mostly that it felt perfectly naturalto sit down and randomly generate characters, build starships, and come up with worlds and adventures – just like we had been doing with D&D for several years up until that point. There wasn’t any “Third Imperium” – at this stage of creation, rather than designing sandbox fantasy realms to explore, we set forth creating sandbox star systems to explore. If that’s not “old school” I’m not sure what is.

One of the interesting rules modifications that was adopted by several referees around the Sixth Precinct Gaming Club (aka the Golden Lion Gaming Club of Gary Fine’s book, Shared Fantasy) and the Little Tin Soldier Shop, was to cut fuel consumption during FTL “jumps” in half – so instead of 10% of the ship’s mass per parsec traveled, it was 5%. That made it possible for ships to travel farther, and for empires to be larger. My own attempts in this regard – like many others – were fairly small by later standards, “pocket empires” in later parlance – somewhere around 10-20 star systems, surrounded by various lower-tech star systems. But some of the referees had put together maps that were much much larger – if I recall correctly, several sheets of paper with small hexes (each sheet would easily hold an entire Traveller sector, and possibly four of them), so these would be empires on a scale not much smaller than the Third Imperium of later fame.

Within a fairly short time – easily by the spring of 1978 – there were easily a bunch of different campaigns running, some of them sharing the same universe, some of them dividing up the galaxy like earlier efforts to have different dungeons all in the same (or connected) universe(s). What I regret now is that so much of this has been largely lost in the mists of time; it would be great if there was some effort to gather the history of these campaigns and others that existed before the coming of the Third Imperium.

Classic Traveller is iconic.  It was the first really successful science fiction role-playing game, preceded by Metamorphosis: Alpha and Space Quest and a number of other largely forgotten games.  What made Traveller different was that there was actually a minimum of background provided in the rules – most of the other games has assumed a great deal about the background setting for a game.  In providing little background, the designers clearly followed the path of Original D&D, which did not attempt to model any one fantasy setting, but instead drew from many different authors and backgrounds… But the advantages of this are difficult for people to see today, after 30+ years of accretion in the GDW house campaign of the Third Imperium.  My intention in this series of blog posts is to go back to the original 1977 rules set, looking at it from a fresh perspective as informed by the recent Old School Renaissance…

Possibly the first hint of embedded background comes on page 4: “Should a player consider his character to be so poor as to be beyond help, he should consider joining the accident-prone Scout Corps, with a subconscious view to suicide.”  That’s it – no “Imperial Scout Service” but the “Scout Corps” – whatever that might be…

The choices of careers were themselves interesting: Navy, Marines, Army, Scouts, Merchants, and Other.  None of these were explained in any way, except by reference to actual character generation.  Thus “Navy” represented the “space navy” while “Marines” might be anything from “Mobile Infantry” a la Heinlein’s Starship Troopers to the Marines in Niven and Pournelle’s The Mote in God’s Eye.  “Army” could be Andre Norton’s Star Guard to Pournelle’s Falkenberg Legion.  “Scouts” were less clear, but “Merchants” had several science fiction inspirations, ranging from Andre Norton to Robert Heinlein to Poul Anderson (see below).  Lastly, the “Other” occupation was conspicuously opaque in inspiration: were such characters criminals?  (Mike Ford thought so)  Or possibly spies?  (My reading at the time.)  In any case, each career provided a range of possibility, and thus invited a player to spend hours generating characters – which everyone I knew at the time sat down and did, almost immediately…

What is important to note about all of this is how GDW deftly drew on gamers’ previous familiarity with both Original D&D and with popular science fiction to provide a sense of comfort with their new game.  Not too surprisingly, Traveller players and referees made good use of “space opera” to shape their campaigns, long before the Third Imperium was introduced to them…

The combat system itself is relatively abstract and in retrospect fairly elegant, using a straightforward determination of surprise, initial range between parties, determination of escape or avoidance, and then resolution of combat, including movement and attack.  Initial range, in particular, was dealt with abstractly, using a system of “range bands”  (short, close, medium, long and very long range) which I’m sure now was designed as an alternative to a more precise (and therefore complicated and fiddly) miniatures-related system.  However, I don’t recall many of us at the time using the combat system as written. The advantages of the abstract character of combat were something that I think many of us missed at the time, unfortunately.

Keep in mind – we didn’t have a dedicated background setting, merely assumptions about how interstellar travel worked and its various hazards, including hijacking, skipping, and piracy.  I’ve always found it strange just how much effort has been put to interpret Traveller’s rules as an internally consistent worldview, when it was clear to us back in 1977 that the game was inspired by many sources and encompassed many different possibilities.

The idea that experience developed during game play improves player ability runs in parallel with more recent ideas about Old School game play. Additionally, the absence of a defined background setting for Traveller meant that referees had to come up with their own settings and universes – and the experience rules actually suggest ways in which a referee might develop something different.  In this sense, Classic Traveller provided a blank canvas – and encouraged referees to make it their own – and the experience rules were no different than the rest of the game.

One of the daunting tasks faced by the creators of Traveller was how to deal with mapping out space.  Being good wargamers, they realized that attempting to map out space in three dimensions was going to be difficult (though not impossible) for the average wargamer/roleplayer.  So they settled on an abstract representation which was referred to as a subsector.  The map of the subsector represented an 8×10 section of space, with each hex being one parsec across.  For anybody familiar with astronomy, this two-dimensional representation was completely artificial and unrealistic, but that was unimportant from a role-playing perspective…

Star system creation therefore was not terribly “realistic” at all.  However, what it did do was provide a template to follow for mapping out adventure, in much the same way as dungeon and wilderness maps did for Original D&D.  This was, I think, a significant part of the success of Traveller when it initially appeared – the maps did not need to be hard science for the game to work; a structure suggesting a science fiction setting was sufficient and relatively elegant to implement.

“Alternate World Forms:  Several alternatives to the traditional spherical world form are possible. Most occur when a civilization wishes to trap and use energy from its central star, and needs great land surface to do so.  In addition, population pressure (especially on a civilization unable to develop interstellar travel on a large scale) may be a contributing factor.  Alternate world forms are not included in the world creation sequence, but may be provided on a sparing basis by the referee.  They are ideal for large population worlds, but may also be populated by smaller numbers, as in degenerate or decimated worlds.”
Worlds and Adventures, pp. 8-9
Traveller, 1977 Edition

The above paragraph is an example of something found in the 1977 edition that doesn’t show up in the later, revised edition of the game.  The different kinds of alternative world form were mentioned, but the rationale for including them was not.  This may seem like a minor editorial decision, but it indicates in a subtle way how much more open the 1977 edition was to different ideas and ways of doing things…

It’s difficult to convey just how much of a difference these seemingly minor subtractions and additions actually made in world creation, but it was significant.  It also shows how the various assumptions and details of the GDW-in-house campaign, the Third Imperium, emerged rather slowly, allowing for nearly two years of campaign play in a myriad different universes.

8 thoughts on “TRAVELLER: Out of the Box – Interlude: How People Played Traveller in 1977”