This Labor Weekend I’ll be running two sessions of Classic Traveller. To get ready, I’m not only planning out the adventure (based off material I found in Chris Crawford’s Hard Light setting for Stars Without Numbers).

To prep for the game, I wanted to create Pre-Generated Characters for the Players. I love the character creation process for Classic Traveller, but it can take time for new players and in a four hour slot, time is precious.

I thought about going an easy route and writing up the characters on index cards–the way it used to be done! But I wanted something a bit fancier to pull the Players into the game. I also wanted clear labels for the “pieces” of the Player Characters, so the Players could know what each one was easily. (Simply running the six characteristics into a string wasn’t going to do. I’d have to keep telling them what each number meant.)

So I decided to build something similar to the Character Sheets that GDW created to look like TAS Forms. However, I wanted something simpler and stripped down.

The sheet fits on a single page of the digest sized pages of the original Traveller books.

There are a lot of boxes on that sheet that we would not be dealing with: Birthworld, Dischargewold, Psionics, and the deeper military histories available through the advanced character generation rules of the later Traveller books. Moreover, in the style of play I like for older RPGs, I don’t want too deep a backstory or too much information about the Player Character’s past. The focus of play is the adventure in front of the Player Characters. Their “back story” is the first sessions of play. (I write more about this here.)

My thinking was, “Even if I leave the boxes empty, there’s just all this stuff lying around that character sheet that will beg questions from the Players.” I wanted something streamlined and to the point, so that the Players would have an idea of what they needed to focus on for the next few hours. To that end, I ended up making this character sheet:

And here’s what I ended up making: 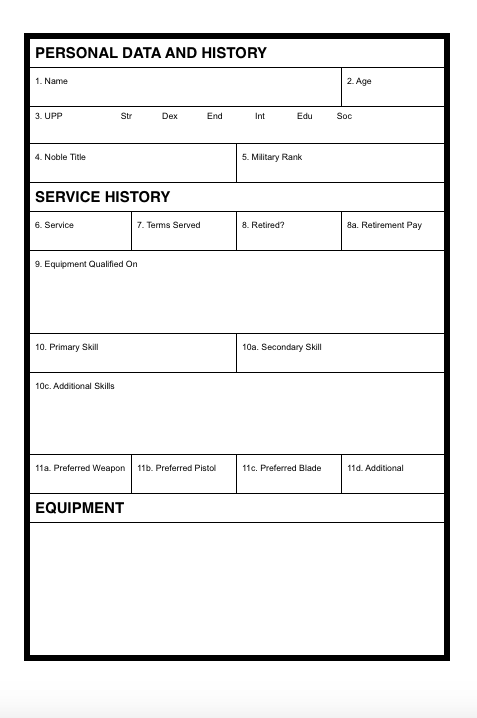 It has more breathing room and a little more clarity on what pieces are needed for play than the original sheet.

You’ll notice I did keep a couple of the bells and whistles: Noble Title and Retirement Pay. These elements probably won’t come into play proper. But they are par to both the setting and the background of the adventure for the characters for the following reason:

In the scenario I’m building, the Player Characters are all formers members of various branches of the military. They’ve struck out on their own (for whatever reasons) and ended up at a dead end star system where a small mining station collects and processes dense metals from a massive asteroid belt. As the scenario begins the Player Characters are just scraping by. Whatever dreams they have had about finding a fortune or settling into a more comfortable life have come to a close. But each one of them has picked up clues about a possible ruin of an ancient civilization within the asteroid built. Recognizing each other as men and women of capable qualities, they have set up a side project on the space station, comparing notes, doing more research, and building a plan. Securing an spacecraft used for repairing drones in the asteroid belt under false pretense, they head off for the location they think a fortune might wait…

Finally, I created 24 pre-generated characters, six each from the branches of the Marines, Navy, Army, and Scouts. I took them from Traveller Supplement 1: 1001 Characters and wrote them on the character sheet. I’ll set them in four groups on the table and say, “Which branch do you want your character to have served in? Pick one from the respective pile.”

Here’s what one of the character sheets looks like filled in. 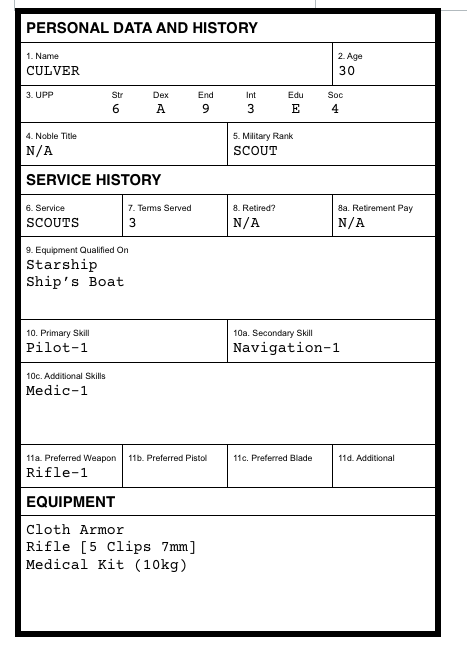 For my convention game, I’m assuming the Player Characters are down on their luck, have no cash, posses a weapon corresponding to any specific weapon skill they have, and tool sets corresponding to any specific skill they have. Other than that, I don’t want a lot of footing with buying gear. What they have is what they have. That’s why they’re going on an adventure. (Think of Bogart at the start of The Treasure of Sierra Madre, and you’re all set!)

I think (I hope!) the sheet will be easy to read, allowing the Players to glance down at the sheet and find whatever information they need easily and quickly. The idea was to build a character sheet that lets the Player think, “I’m this kind of guy. How do I see the world though the qualities of my guy. How does this guy choose to solve problem?”

For me, the Classic Traveller system is less about a hard and fast skill system than it is a collection of pieces for the Referee and the Players to end up making rulings (often without die rolls) based on the character concept and the information on the character sheet. This weekend I’ll be taking this view of the game out for a spin!

If you’re interested you can find the PDF with the blank character sheets and all the Pre-generated Characters here. (The blank sheets are on the last page of the document).